Almost three years ago, we mentioned in this blog a sale of three carpets by the Corcoran Gallery with Portuguese provenance – Lafões and Bragança. Sotheby’s is now presenting a sale of Persian carpets from the same gallery, all collected by William Clark in the first half of the 20th century. This is the most important sale in this category for many years and it has some fantastic examples. One of the highlights is the very impressive Lafões Carpet with an estimate of US$ 800,000-1,200,000, which like the three carpets sold in 2009, was bought by Vitall Benguiat in Lisbon. 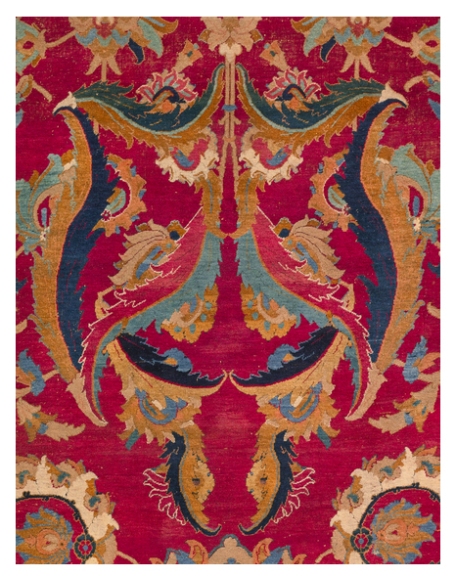 This magnificent carpet was one of many that Senator William A. Clark purchased from Vitall Benguiat, the legendary dealer known as “The Pasha,”  see Wesley Towner, “The Pasha and the Magic Carpets; The story of Vitall Benguiat,” Hali, vol. II, no. 3, pp. 183-191.  Benguiat appears to have been quite a character, largely self-educated, with a deep passion for textiles and carpets, a good eye and boundless energy.  Having come to the United States initially at the behest of the architect Stanford White in 1898, Benguiat went on to become the purveyor of fine carpets to tycoons such as J. P. Morgan, Henry Clay Frick, Henry Walters, Joseph E. Widener and Horace Havemeyer, although “no one attempted to compete with Senator William Clark, ‘the richest man west of the Mississippi’, whose Indo-Isphahans and velvets were believed to have cost him $3,000,000,” ibid, p. 191.   Benguiat travelled to Europe on a regular basis in search of works of art for his American clients, with Portugal being a source for ‘Indo-Isphahan’ carpets.  It is in Portugal that he purchased the present lot as well as the pair of ‘Braganza’ carpets which descended through the Bragancas, the royal family of Portugal.   The pair of ‘Braganza’ carpets were sold by Benguiat through the American Art Association, December 4-5, 1925, lots 71 and 72 with the first now in a private collection, formerly in the Thyssen-Bornemisza Collection, see Friedrich Spuhler, The Thyssen-Bornemisza Collection: Carpets and Textiles, London, 1998, pl. 22 and the second once in the collection of Mrs Edsel B. Ford, eventually sold Christie’s London, 22 April 1999, lot 101.  Three other Isphahan carpets that Benguiat purchased from the Fourth Duke of Lafões were also sold to Senator Clark, see Christie’s New York, November 24, 2009, lots 29, 129 and 133.

The unusually large size and long, narrow dimensions of this carpet denote that it was commissioned for a specific and very grand space. While the design elements are typical to Safavid Isphahan carpets, the configurations of curving lancet leaves into a Western armorial shape at either end of the field point to this carpet being commissioned by a European noble or royal patron.  In this instance, the carpet descended through the Dukes of Lafões, a title that was created in 1718 by King Joao V of Portugal (r. 1707-50) for the illegitimate descendants of his father, King Pedro II (r. 1683-1706).  The first Duke of Lafões was Joao V’s nephew, Pedro Henrique de Braganca (1718-61), and it is more likely that he acquired the carpet than commissioned it, as it is most similar to Isphahan carpets dated to the 17th century featuring curling lancet leaves in the field and border designs.  Related carpets include another still in Portugal, see Jessica Hallett, “From the Looms of Yazd and Isfahan, Persian Carpets and Textiles in Portugal,” Carpets and Textiles in the Iranian World 1400-1700, Oxford 2010, p. 108, fig. 9 from the Convent de Lourical now in the Museo Naçional de Machado Castro, Coimbra, and one from the Benjamin Altman collection now in the Metropolitan Musem of Art, see M.S. Dimand and Jean Mailey, Oriental Rugs in the Metropolitan Museum of Art, New York 1973, cat. no. 30, fig. 99, pp. 70 and 107.

Hallett, op.cit. p.106-110 proposes a chronology for Isphahan spiral-vine and palmette carpets based on structure and design types.  Group 1 are the earliest and are those having a part silk foundation; groups 2, 3 and 4 have all cotton foundations and designs progressing from vines, palmettes and cloudbands (group 2), to which are added curling lancet leaves (group 3), and culminating in group 4 with ‘quatrefoil’ arabesque field patterns and cypress trees in the border.  The first group are from the late 16th/early 17th century with groups 2, 3 and 4 following through the 17th century and into the early 18th century.  As she places The Lafões Carpet in the third group she dates it to the late 17th/early 18th century.   The intricate border to this carpet is unusual and found on a few carpets dated by scholars to the 17th century, including the two mentioned above, another carpet from the Clark collection, sold Christie’s New York, November 24, 2009, lot 129; a fragment in the Al-Sabah Collection, Kuwait, see Friedrich Spuhler, Carpets from Islamic Lands, Kuwait, 2012, cat. 22, pp. 102-3; a fragmentary carpet sold V. & L. Benguiat Collection, American Art Association, New York, December 4-5, 1925, lot 35; and a carpet once in the collection of J. Paul Getty, sold Sotheby’s New York, September 24, 1991, lot 239.

Prior to entering into the collection of the Duke of Lafões, this carpet may have been in the collection of the royal family or another Portuguese aristocrat.   It is enticing to speculate that it may have been one of the “140 carpets of such extraordinary magnificence…” that covered the pavement at the 1669 baptism of Isabel Louisa, daughter of future King Pedro II, for the quote see Viterbo, F.M., Artes e Artistas em Portugal, Lisbon, 1920 sited in Hallett, op.cit., p. 115.  The scale of the design elements and their elegant rendering in this carpet are perfectly balanced as they are mirrored end to end.  The cloudbands are both intricately drawn and robust in character; the palmettes and leaves are lushly feathered and all are woven in complex color juxtapositions to create a carpet suitable for the sumptuous space, if not palace, for which it was commissioned. Senator Clark decorated a large painting gallery in his New York mansion with this carpet, however, its remarkable condition suggests that this was a gallery reserved for only the most exclusive guests.”

View all posts by joaomaga